The old man and the sea, the eternal inner struggle

“Everything about him was old except his eyes, which were the same color as the sea and were cheerful and indomitable.” Today is the day, tomorrow may not come at all. Ernest Hemingway knows this well when he chooses the old and not the young to carry out the feat in the open sea: the fatal search for the chimera, the vital flicker before the eternal, the last work published in life. In short, the giant marlin of the depths whose hook will be bitten by both the Pulitzer Prize of May 4, 1953 and the Nobel Prize of the following year. We set sail in the sailor’s wake, reach the open sea with him and watch him engage in his personal battle with the prey of life, which inevitably becomes ours as well. We are all in the same boat, not in a fight “against” nature but “with” it. This is perhaps the meaning, one of the many, which can be “fished” by rereading The old man and the sea after some time, a writing too short to be a novel and too long to be a story. Certainly too intense not to leave an indelible trace in the reader, similar to those left by the line on the calloused hands of the fisherman, after days and nights of agony, the latter to be understood in the Greek meaning of agone, or solemn competition. Santiago is not Ahab, just as the marlin is not the white whale. It was an aberration of the literary criticism of the time to approach them to the point of addressing the work “Hemingway’s Moby Dick”. We hear him with our ears declare in a loud voice, to keep company in his solitude, the brotherly love that binds him to the dying creature. 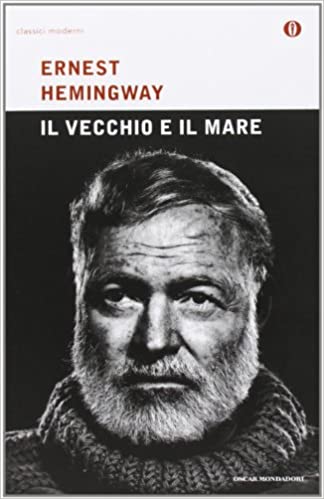 The same tenderness that induces him to dialogue with the birds that hover around the boat or alight on it for a short refreshment. A love like that of St. Francis would be said, if it were not pregnant with the necessity of the sacrifice that takes life to give more, elsewhere. Words of compassion between living beings, as unequivocal as the old man’s devotion to that sea he calls in a feminine way, like the Spaniards and French who address it as a woman. Nothing could be further from Ahab’s contemptuous ardor for the reasoning of nature. Our old man is exhausted, his prey is dismembered by the sharks who have smelled the trail of blood. We observe him chasing the lights of the shore towards the return, exhausted too, drenched in sweat and tears, with skin burned by the sun and salt. We got used to it. We fought hard alongside him and alongside the marlin, now siding with one, now with the other, without resolving. After all, there is no solution, but continuity. Man is nothing other than nature and nature is nothing other than what man calls God. This we learned in a fishing trip that has never been so painful and lonely, a struggle between a man at the end of his life and himself. “Fish […] I will stay with you until death. It too will stay with me, thought the old man, and waited for the light to rise”.