My name is Michelangelo Buonarroti

“May I always want more than I can achieve”, a daily invocation to God who has given me the soul of an artist, the heart of a child, and the sight of an eagle sculpting and painting where he rests look. Even if amidst torments and doubts, you have allowed me to create unimaginable beauties, in my works I recognize the power of God. Many writers, shrewd art historians, including the emeritus Claudio Strinati, have alternated over time, writing and speaking of me, of my being an Artist. They have spent countless words, covered with ink thousands of blank sheets. They think they know me thoroughly but not enough, examining me through my creations, for centuries, yet they do not realize how many times I myself “traveling” within myself have feared not recognizing myself, I have struggled in solitude, nest of my soul , seeking the truth, debunking myths, established conventions, urban legends, questioning myself about time, the most feared opponent, wondering how much I still had to dedicate myself to my essence of life: art! Evade it! Without compromising, omitting futility and clichés, to ward off death, I sketched several works to exorcise it, with the intention of finishing them while waiting for a distant and better time. Time is a part of eternity, which like Petrarch for me includes the past, present and future without interruption. The fleetingness of time! They attributed works to me that perhaps I have never made, or perhaps yes! 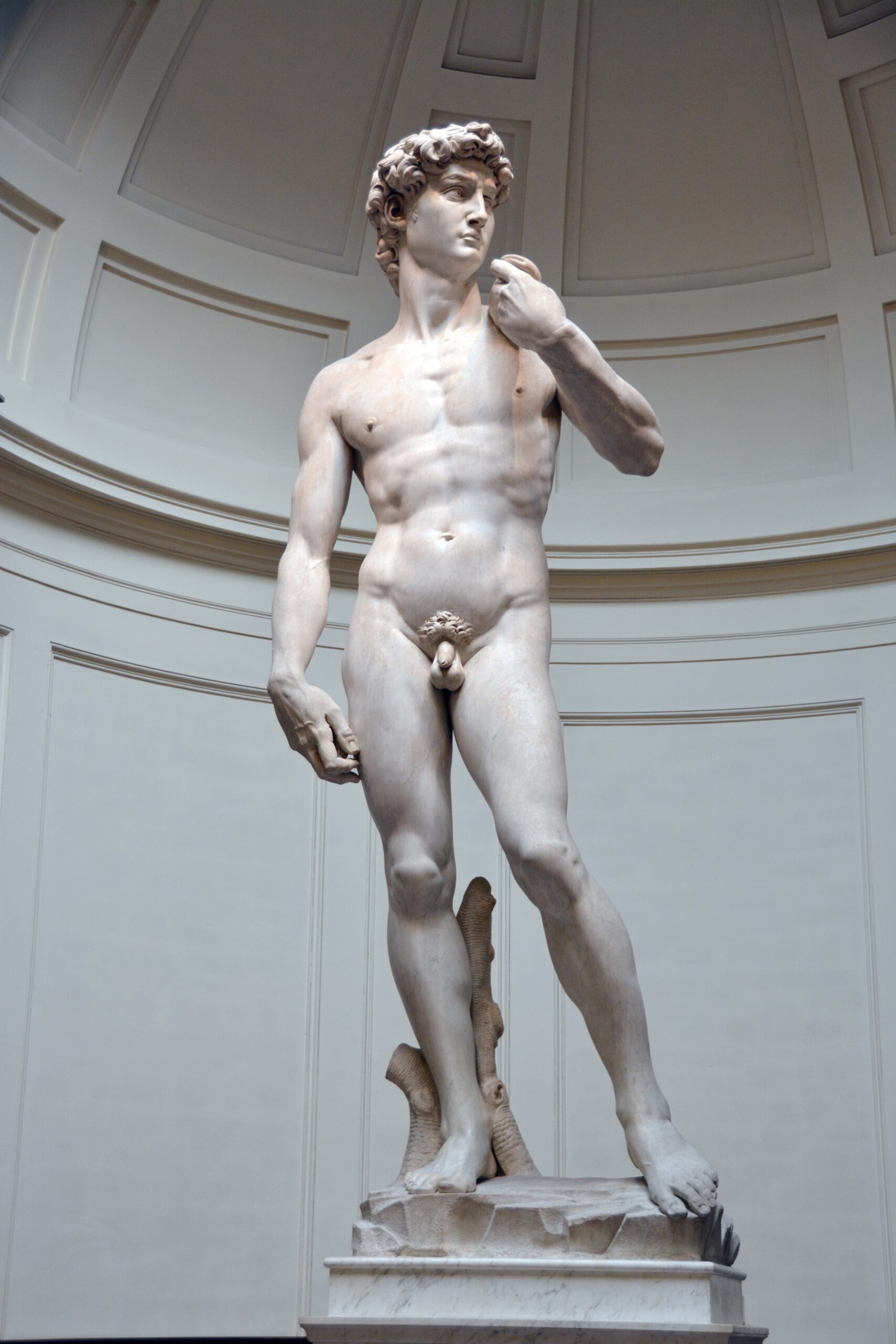 It was the American scholar Robert Schoen, one of Michelangelo Buonarroti’s leading international experts, who confirmed Michelangelo’s authorship of the fresco that adorns the right side of the church of Santa Maria in Marcialla (Florence). Schoen believes that the monumental fresco was born from a drawing by Michelangelo. In 1984 the scholar became famous for having identified and located in New York the “Cupid” made by Michelangelo in 1497 and of which all traces had been lost for five centuries.They called me one of the greatest artists of the Renaissance, I never would have imagined. Be an Artist! My works have been visited, enjoyed, loved by millions of men and women from all over the world, how many sighs, joys, pains, love and passion continue to arouse in everyone’s soul. I see that little boy who already showed great drawing skills at the age of nine.

Due to my innate artistic gifts, I quickly became a disciple in the workshop of Ghirlandaio, the famous painter of the time. I was born on March 6, 1475, in Caprese, Tuscany, into a modest family, but during the first months of life we ​​moved with the whole family to Florence. At the end of the fifteenth century the Medici family was among the most powerful of the time. I was lucky enough to be in the good graces of Lorenzo the Magnificent who, enraptured by my talent, hosted me at his home, treating me like a son, arousing many envy among other future artists.It will leave you dismayed to think that, albeit with different ages, Michelangelo, Leonardo and Raffaello lived in the same city.When we met for work reasons, they were sparks, I considered Leonardo a fool, he kept me silent, consumed with envy for the many commissions I received from the notables of the time, of being a social climber. Florence was at the height of the Renaissance, my colleagues and I, often indomitable adversaries, little feared by me, have bequeathed you masterpieces capable of overcoming the centuries, influencing the world of art forever. The time spent at the Medici house was a golden, profitable period for me.

I sculpted for whole days in the Garden of San Marco, the place where free sculpture lessons took place, my greatest passion, learning the tricks of the trade. I had the opportunity to meet the scholars of my time, useful for my artistic training: Pico della Mirandola, Marsilio Ficino, Angelo Poliziano and Cristofaro Landino. In 1492 America was discovered, and at the same time my stay in the Medici house ended with the death of the Magnificent. At the Medici court I made my first sculptures: the “Battle of the Centaurs”, and the “Madonna della Scala”, representation of the highest expression of the artistic ideals of the Renaissance.When Michelangelo arrives in Rome and is about to make the Pietà, the climate is already changing, new worlds, new ideas, new literary and cultural currents are being explored. The Renaissance takes shape, the genesis of the work of art; a New Humanism emerges thanks to the poet, philosopher and writer Petrarch, precursor of the movement thanks to his most famous work, the Canzoniere, a true model of stylistic excellence.Today, centuries later, you continue to write and talk about me, recounting my feats, the works that made me immortal. I took my last breath on that distant February 18, 1564 in the city of Rome, my body remained lifeless, detached from earthly life, but my spirit was freed and since then it has wandered through museums all over the world.Have you ever thought, while visiting a museum, about how many artists’ souls and moans have lived in those rooms for centuries? Art goes beyond even death and abolishes time, nullifying it, just as Petrarch suggests.When you feel ecstatic in front of my “Pietà” of the early years, think of how much vigor, desire to succeed in the enterprise, boldness in showing what I was worth pushed me to accept the prestigious position. The work was commissioned to me in 1497 by the French Cardinal Jean Bilhères, I was twenty-five, the roaring twenties. The task was to sculpt “a Clothed Virgin Mary, with a dead Christo in her arms, as big as a homo giusto is”.

At that time I lived in one of the houses of a wealthy banker, a certain Jacopo Galli, who got me various jobs, including the commission for the Vatican Pietà. I remember that it took me nine months to choose the block of marble, the most suitable for my needs, and transport it from the Carrara quarries to Rome. Many wonder why in such a sculptural work the Virgin appears younger than her dead son. How is it possible? I wanted to exalt the Christian concept of eternal life on the face of Mary, the young and uncorrupted mother, Immaculate. For me, art is an attempt to go beyond time: I have fought all my life, for the triumph of eternity.The latter is a concept well expressed by the historian and popularizer of art Claudio Strinati. Michelangelo is one of the greatest artists of the Italian Renaissance, one of the most important periods of Italian art that made Florence the cultural capital of the world. Among his most famous works we can remember: “Davide”, “Pietà”, (Michelangelo created three Pietà), “Tondo di Doni”, a sparkling painting in which the intense colors of red and blue triumph. A contemporary classic. In addition to the paintings on the ceiling of the Sistine Chapel in Rome, the monumental fresco “The Last Judgment” triumphs, created between 1535 and 1541 on commission from Pope Clement VII, a contract signed after various tribulations and conflicting opinions.The universal judgment”! Five hundred square meters decorated by myself, setting and realization of atypical and anti-traditional figures for those times. The subject of much controversy. Four years of hard and intense work. Years of torment, fear of failure, pain in living. While I was working in solitude and in communion with God, I felt that my body could no longer hold me, I wavered and asked myself: “You awakened this divine soul to me and then imprisoned it in a weak and fragile body, how sad it is to live in it.In recent weeks the emotional Pietà Rondanini returns to Milan in all its glory, at the Sforzesco Museum. The last work left unfinished, but no less engaging than the others, in my opinion the truest, authentic expression of being, of the soul and on which according to sources of the time, the great artist worked until a few days before his death. The work had become a real obsession, almost a prelude to his death. 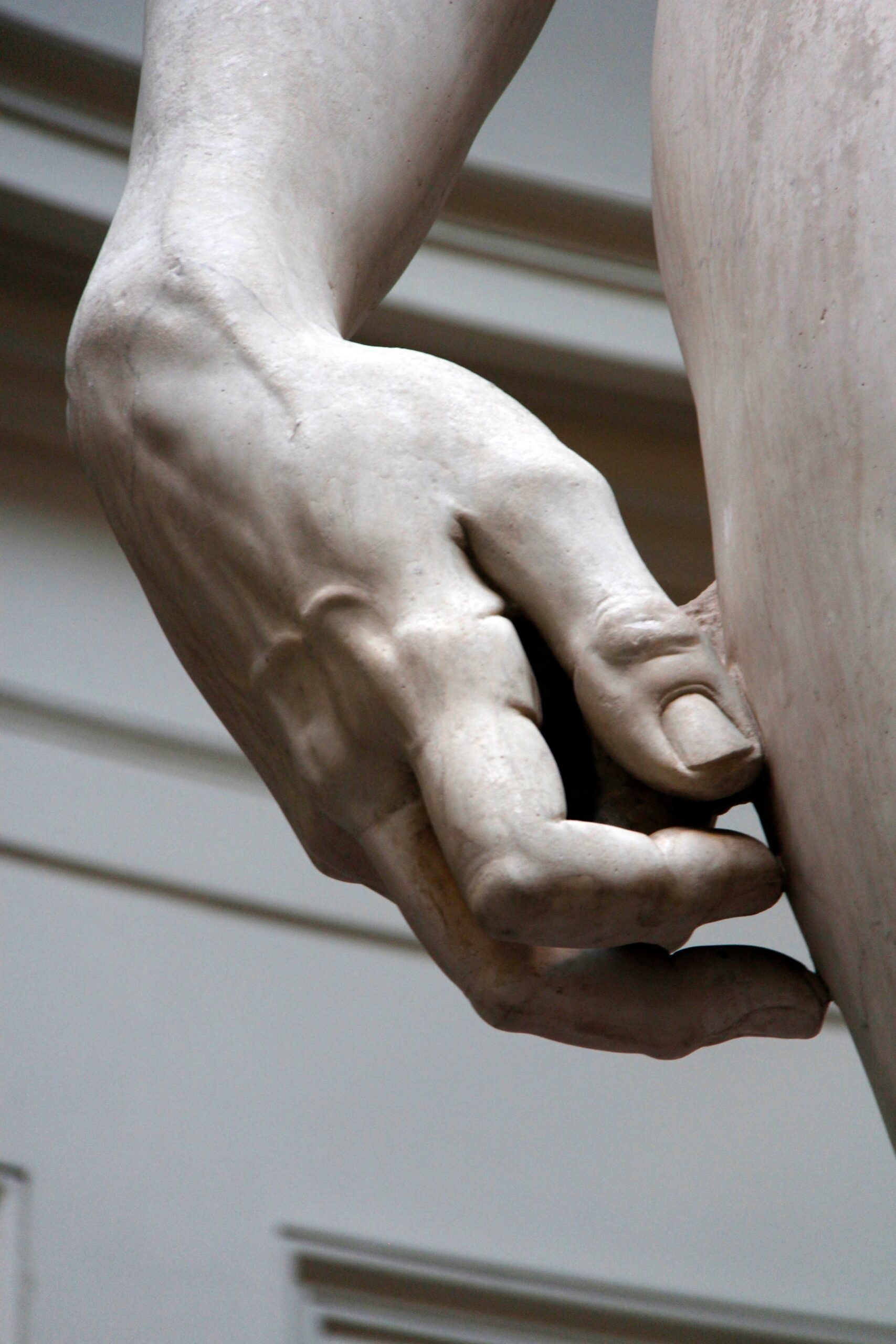 The Davide is among the most famous works in the world, considered by experts to be the most beautiful artistic object ever created by man.I have given voice, sound, lyricism and form to beauty, I created it, handed it down to you, still today after centuries enveloped in front of such great beauty and divine love, while the breath of God breathes on you, I feel your frailties and human miseries. You are incredulous! God’s hand guided my heart. “The world has many kings and only one Michelagnolo”, says the scholar of the time Pietro Aretino. Miracle of Art!