It is difficult to tell who has achieved so much in the art world for years, and continues tirelessly, making a significant cultural contribution to his city for over thirty years, exporting Italian artists and importing the greatest international artists. The recent headquarters of the Alfonso Artiaco Gallery is located in Piazzetta Nilo, in the heart of Naples. Every great story has a natural stage in which to tell itself; I will tell you about one of the greatest Italian gallerists in the scenario of the most beautiful city in the world: Naples!

We wonder about the authoritativeness and permanence of contemporary art; it is the eternal diatribe. In your opinion, is art relegated only to the intellectual spheres? Don’t you think that art without an audience remains a firm liturgy? The idea of ​​art as a phenomenon destined for a cultural elite is an outdated concept. Over the years it has seen an extraordinary increase in the number of its users, its audience is today absolutely very varied, numerous and always up-to-date.At the beginning of the twenty-first century, who do you think are the underestimated artists?There have always been underestimated artists, but generally those who have had something to saythey are appreciated sooner or later. Think of Caravaggio, to name the most famous, whose genius was only recognized in the 1900s.Arturo Schwarz, art historian and essayist, used to say: “One was not born in vain at the foot of a volcano” referring to Vesuvius. Does being born in Naples make a difference?Certainly, Naples gives you an ability to tackle problems with greater resolve, but it is also the place that taught me to reflect and focus on what is really important.How did your adventure in art begin? Passions are often born as a child, or are inherited from parents. Of course, for a child, thinking of becoming a gallery owner is not exactly like wishing to be an artist. Was art a revelation for you?A bit of one and a bit of the other. My father, like so many professionals from good middle-class families, collected paintings, but none worthy of note. As a child I was a bad designer so I realized that if I had a role in this world, it would never have been that of the artist. Shortly before I started my career, I realized that others, working as gallery owners, had also managed to express a certain creativity in an incisive way, even if different from that of artists.There have been many visionaries in the past years who have believed and invested in unrecognized artists, often even taking risks: Giuseppe Panza, Leo Castelli, Lucio Amelio. Have you risked and failed at times in making choices dictated by impulse?Those who work in this world can achieve glory but also breathe the dust. The choices that are made belong to a condition of the here and now. With this mode you can make mistakes, of course, and who hasn’t made any. The important thing is that the balance in the end is always positive between the right things and the wrong ones.What I admire in you is also the ability to work as a team. Making a system today helps the market of art?This is what I have always tried to do, but I am not convinced that there is an art system and this is one of the reasons for the limit of our action on the international field. The idea that a gallery is the only owner of its destiny pains me and makes me not happy. The idea of ​​teaming up in the world of Italian culture, understood in the highest possible sense, is still a result to be achieved. With this in mind, the creation of Italics, a consortium of the best Italian galleries, was an immediately accepted challenge.Art Basel is one of the most important art fairs in the world in which you have been participating for years; 2021 also saw you participate with innovative and historical artists. Are fairs a great springboard for galleries and artists?I have been taking part in the Basel fair without interruption since 1994. Of the art fairs all over the world, this is undoubtedly the most important. Fairs are a work tool, useful for showing my program to a wider audience than the one visiting the gallery in Naples.Your relationship with artists: do you prefer to visit the studios, enter the “rooms” of the creators of dreams, or “surf” the internet in search of new talents?I see them first of all in exhibitions or visiting their studios, the works must be observed from life. Getting to know the artist directly, when he has deep affinities with the choices I make, is the first step to create a solid and constructive relationship.Could we look at a more human art away from the logic of the market? Is every generation of collectors equivalent to a new generation of artists?Art must be art, not an out-of-world phenomenon that translates into a cynical market value. In truth, those who worked on the market tout court in the past may have had a moment of glory, but without then having continuity and often ending up forgotten or set aside. I don’t think there is an equation between the age of those who buy art and that of artists. There are collectors later in the years who appreciate and support young artists, but also young collectors who prefer masters with a consolidated curriculum.After the pandemic, do you think we will see an epochal change also in the field of art, or in any case the standardization that prevails will apply?I don’t know exactly what is meant by prevailing homologation, but I would say no. The pandemic has certainly affected the dynamism of the art world. Movements around the world are now more limited but the relationship with the work will always be physical. During the pandemic, social media and the internet helped galleries a lot to get out of their forced isolation.My last question is of a more sentimental kind: is Art or Love more important to you?Love is more important, of course. “You have to want the impossible, so that the impossible happens”. With art everything is possible! 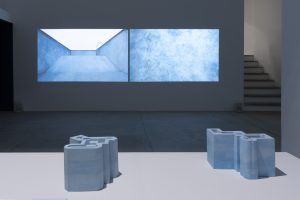